Aston, PA — Last week, The Eastern Hockey League (EHL) announced their Annual Awards.  Five Little Flyers received awards, headlined by Tyler Cassidy taking home the Goaltender of the Year award in the EHL’s Premier League.  The 2001 native of Havertown, PA finished the season with a 16-4-1 record in net with an impressive 2.44 Goals Against Average and .921 save percentage.  Cassidy finished tied for 2nd in the league with four shutouts. In addition to Goaltender of the Year Honors, Cassidy was also named to the All-EHL Premier team.

Bredeson was an iron man for the Little Flyers EHL team this season, suiting up for all 49 of the Little Flyers games.  On the season, Bredeson finished with 32 points, including two game winning goals. In February, Bredeson committed to Morrisville State.

Green, one of the EHL Premier’s top shutdown defenseman, played in 39 games in his second year of Junior Hockey.  The Bear, Delaware native scored six goals and added 18 assists. Two of the 2002 birth year defenseman’s goals were game winners.

Sebastian Rominiecki (D,EHLP) - EHLP 1st Team Mid-Atlantic All-Conference
Rominiecki, joins his defensive partner Shane Green on the EHLP’s All-Conference team.  The 2001 birth year native of Runnemede, NJ played in all 41 of the Little Flyers games, scoring six goals and adding 21 assists.  Rominiecki racked up the Premier league honors this season, being named Defenseman of the Week twice and Defenseman of the Month in January.

Cassidy, Green, Rominiecki and Schon are all alumni of the Little Flyers Youth Hockey program.

Master, a 5’9” 165 lb Forward from Broomall, PA had a successful Rookie year playing for the Stevenson University Mustangs, averaging just over a point per game.  Master, who received two Rookie of the Week honors throughout the season, scored 13 goals and added 18 assists for a total of 31 points in 27 games played for the Mustangs.  Prior to earning the All-Rookie team nod from the UCHC, Master was named Rookie of the Year by the Middle Atlantic Conference two weeks ago.

Mroz, a 6’3” 215lb Defenseman from Prague, Czech Republic played in all 25 games this season for the Lebanon Valley College Dutchmen in his Freshman year.  In his rookie campaign at the NCAA DIII level, Mroz scored one goal and added 10 assists for 11 points.  Mroz, led the Dutchmen in shots on goal with 73, including a game where he registered 9 shots on goal against Chatham University.

Aston, PA --  The Philadelphia Little Flyers EHL Premier team continued its hot start to the regular season, picking up an 8-3 win against the New Jersey Renegades on Sunday, in their only game of the weekend.  The Philadelphia offense got going earlier when Jon Rineer won a face-off deep in the Renegades zone back to Patrick Price who sent the puck back to David Wilf at the point.  Wilf sent a wrist shot towards the net that was beautifully tipped by Ronnie Higgins and into the back of the net for Higgins first career goal in the black and orange.  Elliott Schon continued his scoring ways as the first year forward took a feed in the slot from line mate Jake Reifer to collect his 5th goal in as many games, Dylan Sangmeister who got the play started by creating a turnover in the neutral zone was also credited with an assist.  The Little Flyers defense did a good job in the first period by limiting the Renegades to just five shots on goal in front of Joel Keller.

Tyler Ruppert increased the Little Flyers lead to 3-0 less than five minutes into the second period.  Kelly Stroik won a battle behind the Renegades net to get the loose puck to Ruppert who curled to the front of the net to score his second goal of the season.  Little Flyers captain Luke Headman put his team up 4-0 taking a feed from Nick Bouchard below the goal line, Headman stick handlded his way to the front of the net to slide the puck into the back of the Renegades net,  Shane Green picked up a helper on the goal.  Pat Jensen followed the Headman goal with his first career goal in junior hockey less than a minute later, firing a wrist shot through traffic to give the Little Flyers a 5-0 lead.  The Renegades were able to get on the board with thirty seconds left in the second period to spoil Keller’s shutout bid.

EHL: Little Flyers Take a Bite Out of Applecore

Aston, PA --  The Philadelphia Little Flyers EHL team hit the road for the first time this season for a weekend series against the New York Applecore.  In game one, Ryan Turse got the Little Flyers on the board mid-way through the first period, taking a feed from Ryan Candia and backhanding it past the Applecore goaltender for his second goal of the season, veteran defenseman Soren Bredeson also picked up an assist on the play.  For the Little Flyers, Thomas McLarnon turned away 8 Applecore shots in the first period.  Will Smith, extended the Little Flyers lead to 2-0 under two minutes into the second period, picking up a loose puck off of Candia in the slot and wristing it into the back of the net, Dante Gattone was credited with the secondary assist on the play.  New York didn’t get discouraged with the deficit as just 23 seconds later they scored their first goal of the game to cut the Little Flyers lead back to one.  The score would remain 2-1 Little Flyers until the final five minutes of the period which was a hectic one.  New York scored three goals in two minutes to take what looked to be a commanding 4-2 lead heading into the second period.  The trio of Tyler Marvil, Sam Clapinson and Dan Mundy would get the Little Flyers back into the game with a great shift that kept the puck deep in the Applecore zone.  Eventually Clapinson and Mundy were able to get the puck to Marvil at the side of the net for the put back goal with just 11 seconds remaining in the second period.  Off of the ensuing faceoff, Alex McBey hammered the puck into the Applecore zone, Kevin Brown chased the puck down and slid it back to McBey on the wall, with three seconds left, McBey shot the puck towards the net.  McBey’s shot deflected off of line mate Cam Lindsay then off of Brown and into the net to tie the game with less than three seconds left to play.

McLarnon stood tall in net for the Little Flyers, turning away all 13 Applecore shots that he faced in the tied game.  Eventually it would be Will Smith sending the Little Flyers home victorious.  On a 3-on-1 rush into the Applecore zone, McBey sent the puck over to Turse creating a 2-on-1 down low, Turse slid the puck across the clot to Smith who hammered the puck home for the game winner.  McLarnon picked up his second win of the young season with a 26 save performance.

In game two, the Philadelphia offense came to life early and often.  Alex McBey got the scoring started with a power play goal 2:14 into the first period.  Kevin Brown set up Cam Lindsay for a shot that was saved by the Applecore goaltender but McBey was right on the doorstep to put the puck into the back of the net.  Forty Five seconds later, Rob Holland extended the lead to 2-0, after Ryan Houle kept the puck in the Applecore zone, Anthony Savignac sent a backhand pass to Holland in the slot all alone, Holland picked his spot and sent a wrist shot across the goal line for his second goal of the season.  Dante Gattone, put the Little Flyers up 3-0, carrying the puck from the Little Flyers defensive zone through the neutral zone and found himself in a 1-on-3 situation against the Applecore defense as he entered their zone.  Gattone put on the jets and made his way past the defense for a one on one with the Applecore net minder, backhanding the puck five hole.  Two minutes later the Applecore’s Charles Massey cut the Little Flyers lead to 3-1 with an even strength goal but Lindsay and McBey would answer back for the Little Flyers.  First, Lindsay put a rebound off of a McBey shot into the net with an assist from Kevin Brown, then McBey scored his second goal of the game with under two minutes to play with helpers coming from Liindsay and Gattone.  Philadelphia took a 5-1 lead into the first intermission.  Adrian Morales made 9 saves in net for the Little Flyers in the period.

The Applecore scored a power play goal just :47 into the second period to once again get within three.  The score would remain that way until Ryan Candia netted his first goal of the game that was set up by linemates Ryan Turse and Will Smith.  Ryan Houle’s unassisted goal with under two minutes left in the second gave the visiting Little Flyers their largest lead of the day heading into the final 20 minutes of play.

Candia’s second goal of the day came just :54 into the third period but seemed to put the game out of reach, Turse and defenseman Brett Turner were credited with assists on the Little Flyers 8th tally of the day.  Cam Lindsay capped the Little Flyers scoring on the day with a 4-on-3 power play goal, Kevin Brown registered his 3rd assist of the game on the goal and Ryan Houle picked up his third point with the secondary assist.  Adrian Morales remained sharp in the third period, making 11 more saves to bring his game total up to 28 and picking up his second win in as many chances in a Little Flyers uniform.

The third period was a closely contested one with the Little Flyers holding onto a one goal lead with only four defenseman left playing in the game.  The Revolution found the equalizer at the 13:50 mark of the third period.  Two minutes later, second year defenseman Shane Green would send the home crowd home happy.  The 2002 birth year defenseman picked up the puck in the neutral zone, skated into the Revolution zone with Elliott Schon crashing the net, Green went around a defenseman and backhanded the puck into the net for the game winning goal.  Even though the Revolution held a 14-7 shot advantage in the third period, Joel Keller held on and made some big saves down the stretch to pick up his first career win in net for the Little Flyers Premier team.  The Little Flyers are back on the ice this weekend with a home game on Saturday at 1:30 PM against the New Jersey 87s then hit the road on Sunday for an 11:30am game at the Philadelphia Revolution. 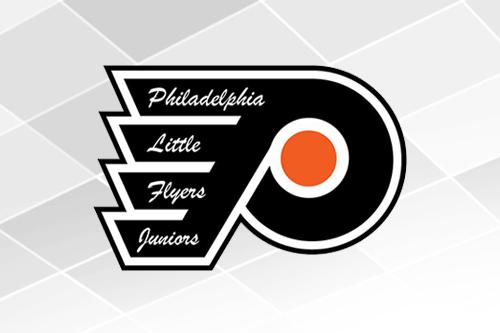