AJHL announces Players of the Week 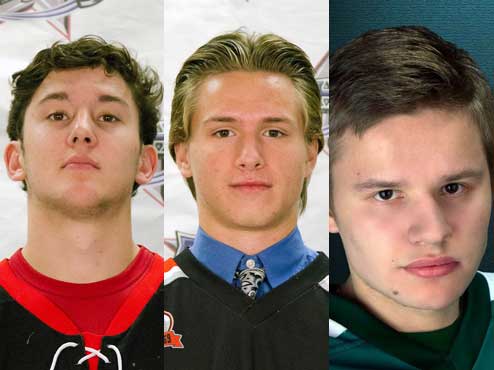 Felteau, from Peabody, Mass., struck for four goals and three assists as the Cyclones picked up two victories. On Wednesday, the 1993-born connected for a goal and an assist in a 7-5 win over the Connecticut Wolfpack. Four days later, the 6-foot, 180-pounder recorded a hat trick, including the game-winning goal, and two assists as the Cyclones blanked the Walpole Express, 6-0.

“Jonathan’s having a terrific season and has played a big role in our success,” said Cyclones head coach Bill Flanagan. “He’s got a ton of skill and tremendous work ethic, and has a very bright future ahead of him.”

Chuckran, a Newtown Square, Pa., native, rang up a goal and seven assists as the Little Flyers went 0-2-1. On Friday, the 1994-born picked up four assists in a 7-6 overtime loss to the New Jersey Titans. The next day, the 5-foot-11, 180-pounder tallied a goal and two assists as the Little Flyers fell to the New York Bobcats, 5-4. Chuckran wrapped up his week with another assist in a 4-3 loss to the Bobcats on Sunday.

"Gabe's been a steady force for us all year," said Little Flyers head coach Steve Washkalavitch. "He had an early-season injury, but came back strong and motivated. He's a great competitor and maturing into a great player, and I look forward to working with him as he chases his goal of playing NCAA Division I hockey."

Yanin, from St. Petersburg, Russia, backstopped the Rockets to two victories, turning aside 73 of 74 shots. On Saturday, the 1992-born made 40 saves in a 1-0 shutout victory over the Titans. The next day, the 6-foot, 170-pounder stopped 33 shots as the Rockets downed the Philadelphia Jr. Flyers, 4-1.

“You couldn't have asked for a better performance from your goaltender,” said Rockets head coach Bob Thornton. “When Anton battles the way he did, you better believe we’ll be in a position to win. As the season winds down, having a veteran keeper like him will be a huge plus for our team.”