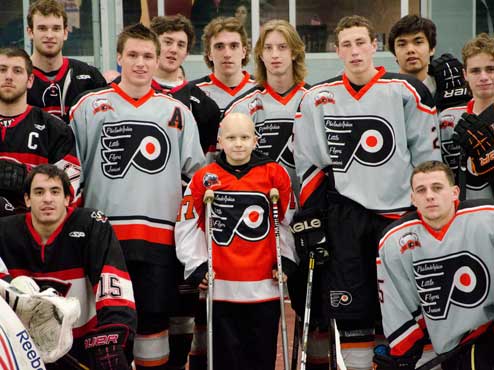 The Philadelphia Little Flyers organization honored one of its own on Saturday, as the program welcomed Christian Chomik back to the rink.

Chomik, a member of the Little Flyers' 2001 team last season who was diagnosed with Ewing's Sarcoma - a form of bone cancer - returned to Iceworks for the first time in over a year and was part of a ceremonial puck drop prior to the Little Flyers-Northern Cyclones Atlantic Junior Hockey League game.

Chomik recently competed 17 rounds of aggressive chemotherapy treatments, in addition to undergoing surgery to remove the damaged bone in his leg.

Chomik visited the Little Flyers’ locker room before the game to meet the players before leading them onto the ice.

“Christian didn’t want any assistance walking onto the ice,” Giacobbo added. “Anyone who knows him understands he’s is a very determined young man.

“The Little Flyers would like to thank the Cyclones staff and players for their participation in the day’s events; just being a part of it puts playing hockey in perspective.”