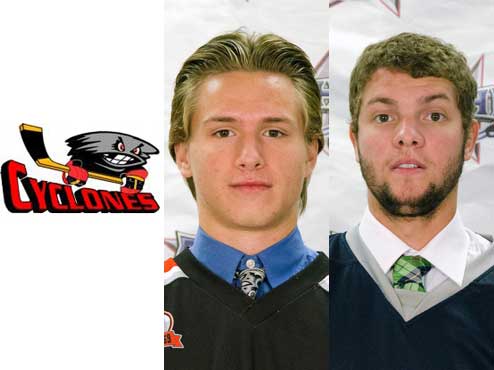 Koster, from Kittanning, Pa., struck for three goals and seven assists as the Cyclones forged a 2-0-1 record. On Wednesday, the 1992-born tallied a goal and two assists, including one on forward Jonathan Felteau’s game-winning marker, in a 6-2 victory over the Laconia Leafs. Three days later, the 5-foot-11, 180-pounder picked up a goal and an assist as the Cyclones skated to a 3-3 with the Philadelphia Little Flyers. On Sunday, Koster put home another goal and four more assists, including one on another Felteau game-winner, as the Cyclones downed the Philadelphia Jr. Flyers, 6-2.

“Jurgen’s an extremely gifted offensive player who has the ability to make an impact every time he’s on the ice,” said Cyclones head coach Bill Flanagan. “Not only is he skilled, but he makes the players around him better which has only fueled our success as a team.”

“Gabe continues to prove himself as one of the top defensemen in the league and has a very bright future ahead of him,” said Little Flyers head coach Steve Washkalavitch. “He’s a talented player who’s effective at both ends of the ice and, what’s even better, he’s committed to improving his game every day.”

“Mike’s been our most consistent player all year,” said Knights head coach Justin Lyle. “He gives us a chance to win the game before it starts, and his teammates have a lot of confidence playing in front of him. There’s no doubt he’ll be an impact goaltender at the college level.”